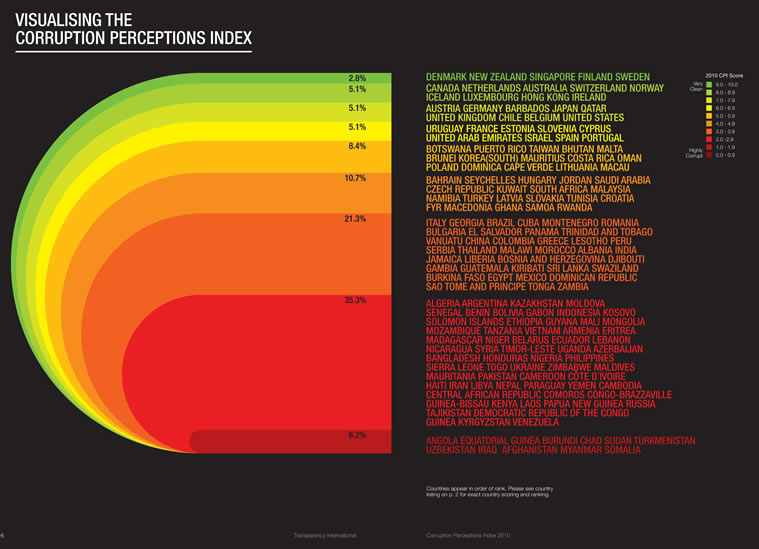 Global Corruption in the Construction industry

The value of global construction output is expected to increase by $8 trillion to reach $17.5 trillion per annum by 2030.

It is difficult to determine precisely the value of losses through corruption, but estimates tend to range between 10 and 30%. The experience of the CoST programme suggests that a similar amount could be lost through mismanagement and inefficiency. This means that by 2030, unless measures are introduced that effectively improve this situation, close to $6 trillion could be lost annually through corruption, mismanagement and inefficiency.

Losses on this scale cannot be tolerated in any sector, but losses in infrastructure investment have particular significance. This is because infrastructure underpins almost every aspect of economic growth and human development. It is a vital component of the most pressing global challenges that we face, including eliminating poverty, achieving food security, rebuilding the global economy and dealing with the effects of climate change. Put simply, unless we rapidly improve the efficiency of infrastructure investments, our efforts to meet the great global challenges of our era are less likely to succeed.

So what is it that makes the construction industry so corrupt? Niell Stansbury of the Global Infrastructure Anti-Corruption Centre has identified 13 features that make construction particularly prone to corruption.

In some instances, procurement procedures can also inadvertently encourage corrupt behaviour. An investigation by the UK Office of Fair Trading in 2008 uncovered widespread collusion amongst companies bidding for government contracts.

It became apparent that in some cases, companies that were invited to tender for work but failed to submit a bid because they were busy on other projects, would be removed from tender lists and denied the opportunity to bid for future work. In some cases, companies consulted with each other and submitted artificially high bids to avoid winning the work but remain on tender lists. These examples of ‘cover pricing’ are technically breaches of competition law, but in many cases they would not have led to any financial cost to the client or gain for the contractor and could be seen as a rational response to poorly conceived procurement practice.

Instances of cover pricing in the UK have since reduced as a result in part of a move away from competitive tendering based on lowest price and towards a greater focus on quality and collaborative working arrangements. This brings me to the question of what can be done to reduce corruption in the future and I will focus on two areas of reform that are often neglected; the “obsession” with lowest price bidding and the need to improve project preparation.

The UK has deliberately moved away from lowest price bidding during the last 10-15 years. The reason for this was because it was not delivering cost savings. In fact, evidence showed that lowest price bidding was more likely to result in time and cost overruns, leading ultimately to poor value for money and greater whole life costs in the maintenance and operation of built assets. This is because lowest price bidding encourages contractors to bid for work at unrealistically low levels. It then becomes difficult for them to maintain standards and make profits, the quality of their work falls and they become more likely to make unjustified claims, delay payments to subcontractors and indulge in corrupt behaviour to reduce their losses.

This and similar experiences are now becoming more widely recognised. It is significant, for example, that a recent review of World Bank procurement procedures resulted in a new procurement framework that for the first time allows contracts to be awarded on criteria other than price.

Project preparation is the second area of reform,  Poor preparation, whether due to corruption, negligence or inadequate capacity, is particularly significant, as it increases opportunities for corruption later in the delivery cycle. When projects are poorly prepared – for example when they are incompletely designed, poorly budgeted or have dubious or even non-existent benefits – it can lead to delays that may require changes that can be manipulated to benefit individuals or companies.identified four essential steps in project preparation and the measures needed to strengthen them and help reduce corruption and inefficiency. They are

Reducing corruption and inefficiency in the construction sector is a complex governance challenge, and reforms are necessary on a range of fronts. I have focused on lowest price bidding and project preparation as they are often neglected, but other reforms such as improving transparency and accountability, strengthening professional standards and quality management are equally as important and deserving of attention. It is essential that the institutional realities are taken into consideration when deciding the combination of reforms that are appropriate in any particular economy.

Now is the time to increase investment in infrastructure, but increases in public investment must be accompanied by reforms aimed at ensuring better value for money. This is primarily a challenge for government, but it is not one that it can meet alone. Companies can help, for example, by maintaining high ethical standards in their own operations and by encouraging their public sector clients to focus on improving governance and efficiency. Civil society can help too, for example, by acting as “infomediaries” to interpret data on public investment for stakeholders and by supporting their efforts to act on it.

There are a growing number of examples of the efforts of government, industry and civil society being combined in “multistakeholder initiatives” or MSIs aimed at tackling complex governance challenges. Concerted action of this type has the potential to bring about a step-change in the efficiency of public investment, but only where is sufficient commitment across the institutional spectrum and for now at least, this type of “collective action” remains exceptional. 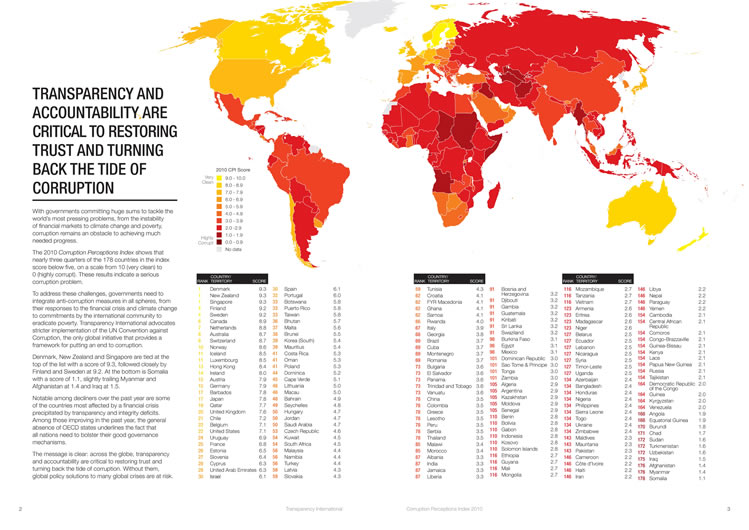 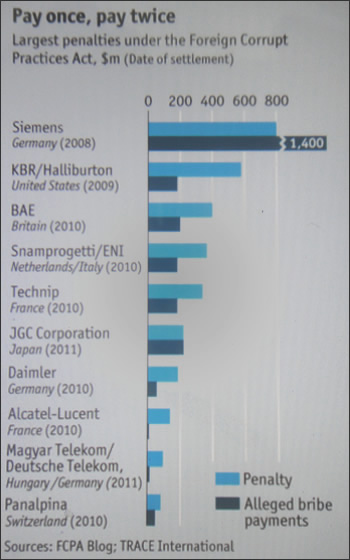 May 16th 2002 from The Economist print edition

According to Transparency International, an anti-corruption organisation, Russian and Chinese companies are paying bribes in developing countries “on an exceptional and intolerable scale”. In rich countries, companies from Italy, America and Japan score poorly, despite their anti-bribery laws and conventions. American and British companies’ record, reckons Transparency International, has deteriorated since 1999.

Bribery in business sectors – by size of bribe

Sixty of the world’s countries are plagued by rampant corruption, defined as a score of less than three on the annual index compiled by Transparency International, a non-governmental organisation. The index focuses on the misuse of public office for private gain. Countries are scored from zero to ten, with ten indicating the least corruption. Once again this year, Finland remains the least corrupt country in the world.